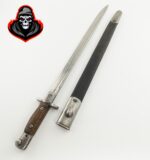 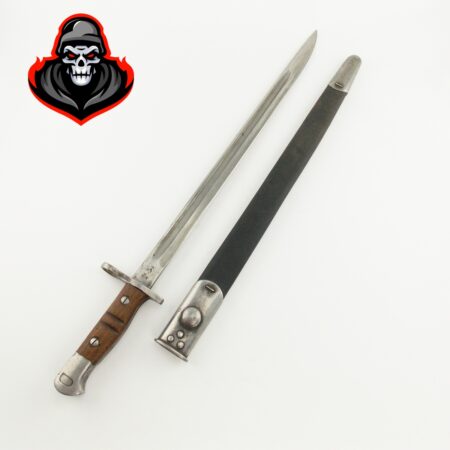 Here we have a beautiful original British WWI P-1907 Bayonet with Scabbard (also original) for sale. This is a original item and only 3 are available.

Questions? Request a Call Back

POOR Based on reviews.

Jacob
M1 infantry helmet I was very pleased with the customer service and fast shipping! This M1 infantry helmet is as close to an original as you can get without destroying history in any way for reenacting! The corking texture is 100% accurate, I would recommend these helmets to anyone!

Here we have for sale an British Remington WWI Pattern 1907 Bayonet with Scabbard (also original) made by Remington. This is a original item and only 3 are available. This bayonet was made by Remington. Only approximately 100,000 of these types (Remington 1907) were made.

We only have 3 of these 1907 bayonets in stock, so hurry they will sell fast 🙂

The person who we got this bayonet from was a US Veteran and brought these home from Afghanistan.

This is a wonderful piece of World War I history! It’s ready to research and display!

Shipping
This bayonet will be shipped the same day of ordering is before 5 PM MST. We ship all packages safely via USPS wrapped up and marked with fragile stickers. You will be emailed a USPS tracking number as soon as your order is shipped.

Around 1906 the British Army conducted trials to find a new longer standard issue bayonet. Experiments were conducted with a number of foreign bayonet designs, including a modified version of the American Model 1905 bayonet and the Japanese Type 30 bayonet. The trials resulted in the British Army adopting its own version of the Type 30 bayonet. The new design was designated Sword bayonet, pattern 1907 (Mark I) and was officially introduced on January 30th, 1908.

Approximately 5,000,000 Pattern 1907 bayonets were made in Britain during World War I. The makers were Wilkinson Sword, Sanderson Brothers & Newbould Ltd, James A. Chapman, Robert Mole & Sons, and Vickers Ltd.

Additionally, Remington UMC produced approximately 100,000 during the war. The Pattern 1907 bayonet was manufactured in India from 1911 to 1940 at the Rifle Factory Ishapore and in Australia from 1913 to 1927, and then again between 1940 and 1945 at the Lithgow Small Arms Factory.