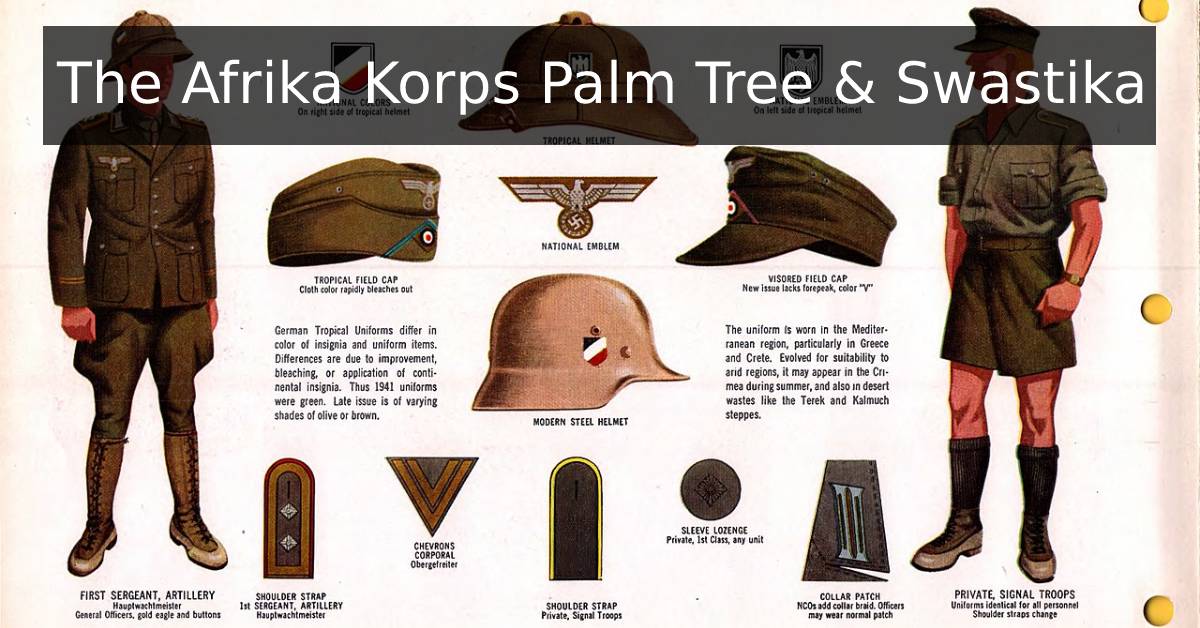 The Truth Behind the Afrika Korps’ Fabled Helmet Insignia

There is a scene in the first film in the Indiana Jones franchise, Raiders of the Lost Ark, where Jones encounters some Nazis. These have a curious symbol on their vehicles, showing a swastika and a palm tree. This logo is not ahistorical. It was indeed used by the German Afrika Korps in North Africa during the Second World War. The only problem is that the Afrika Korps under its legendary commander, General Erwin Rommel, was not constituted until February 1941, whereas Raiders of the Lost Ark is based in 1936. In a way the error is fitting. It is somewhat symptomatic of the myths and uncertainties which have arisen around the Nazi palm tree and swastika symbol or insignia. Today one can find many items for sale online which purport to be authentic Afrika Korps equipment or paraphernalia which never in fact had the palm tree and swastika symbol on them. But surely the most contentious of these items bearing this logo are the helmets purportedly worn by the German soldiers in Rommel’s African divisions. So, the question is, how widely used was the palm tree and swastika symbol and did it ever actually appear on the Afrika Korps helmets of German soldiers in North Africa?

The Afrika Korps was formed in February 1941 to aid the Italians in the effort to press eastwards out of Tunisia and Libya into Egypt and capture both Cairo and the Suez Canal. In 1940 when Mussolini brought Italy into the war it had been imagined that the Italian army, operating from its bases in Libya in North Africa and Italian East Africa or Abyssinia around what is now Ethiopia would be able to strike into Egypt from two different directions and quickly seize these strategic targets. But this simple victory proved ephemeral and, like in the Balkans where the Germans had to come to their ally’s aid in 1941, so too in Africa it was quickly realised that the Italians would need help. The strategic targets were about more than simply extending Italy’s African colonies. Capture of the Suez Canal would open up the Middle East for intervention by the Axis and with it would come a steady supply of oil to prop up the German war effort once the invasion of Russia was undertaken. Moreover, the Germans had concocted a dystopian plan in 1940 to deport Europe’s Jewish population to the East African island of Madagascar, a bizarre scheme the execution of which required control of the Suez Canal. Thus, in the spring of 1941 Hitler and the Nazi regime poured extensive resources into the Afrika Korps, notably the German 5th Light Division which was soon reconstituted as the 21st Panzer Division and the 15th Panzer Division under the command of Erwin Rommel, though overall command remained nominally in the hands of the Italians. These units would fight for over two years in North Africa, initially making considerable advances towards Cairo in 1941, until the Allies successfully pushed the Germans and Italians back through Libya into Tunisia and finally out of North Africa altogether in May 1943.

This, in brief, is how the Afrika Korps came to be in North Africa and how long they spent there. But, is there any evidence to suggest that German troops had the swastika and palm tree logo or insignia embossed on their helmets? The simple truth is there is little or no evidence to suggest that helmets which were being manufactured for and distributed amongst the Afrika Korps ever had the palm tree and swastika symbol on them. The insignia was certainly used for military purposes, but it was generally associated with things other than the helmet of the Afrika Korps. For instance, it was commonly painted on the side of vehicles, particularly trucks and jeeps, though not so much tanks. These were put on the side of such vehicles to act as Fahrzeugerkennungszeichen or ‘vehicle qualifiers’, a symbol which could be used to identify such jeeps and trucks as Nazi vehicles in the desert and what unit they belonged to. This was especially necessary in order to prevent Italian and German fighter and bomber planes from striking at friendly tanks in the desert.

An alternate version of the insignia presents a circular image with a palm tree on the left, a sun rising in the middle and a swastika at the bottom. This was known as the Sonderverband 288 patch and was used on tunics and overcoats which were distributed to members of the Afrika Korps. The patch is known to have been distributed to members of the 90th Light Division, an elite motorized unit attached to the Division. The 90th played a major role in the North Africa campaign, particularly in the Western Desert against the British Eight Army, before finally being pushed back into Tunisia and surrendering there to the Allies in May 1943. It was later reconstituted by the Axis to fight in Italy following the Allies opening of the southern front there in the summer of 1943.

While it did not appear on the helmets of German soldiers, the palm tree and swastika symbol became widely used by the occupying German forces in North Africa for a range of civilian purposes. For instance, it was used as the main image of the German Feldpost stamp in Tunisia (see image) in 1942 and there are thousands of surviving stamps from Tunisia bearing the symbol for the period through to the Allies’ conquest of the country in the spring and early summer of 1943. Curiously the stamp had no value, the inference being it could be used to send any letter of any size or weight to any location in the Axis countries back in Europe. Nor were stamps the only area in which the palm tree and swastika insignia was employed in North Africa. The symbol was also used as part of the masthead for field newspapers and was even employed to decorate Afrika Korps jewellery such as ornate cigarette boxes and service rings. It was also sometimes applied to overcoats and other items of clothing (see further images on the cigarette case and the patch from an Afrika Korps overcoat bearing the logo).

So, we might well ask, if the swastika and palm tree logo was not printed on the helmets of soldiers serving in the Afrika Korps why is it widely believed that it was? This issue has been complicated by the fact that some merchants of Second World War memorabilia have taken to selling fake items which were allegedly Afrika Korps equipment and adding the palm tree and swastika insignia to them as a means of making the items seem more credible. There are further instances of objects associated with the Afrika Korps bearing the palm tree and swastika insignia, which, as with the helmets one will come across on the market, are also of very dubious authenticity. For instance, Nazi flags purportedly having belonged to the Afrika Korps are available online which include the symbol, but there is no evidence to indicate that such flags were ever produced and any items like this for sale online are probably of dubious authenticity.

One final theory as to why the swastika and palm tree logo has come to be known as one which was put on the helmets issued to the Afrika Korps by the German high command, is that it possible was a practice of some German soldiers serving in North Africa to paint their own version of the logo onto their helmets. In this instance it is supposed that these soldiers were seeing the symbol quite a bit in Libya and Tunisia on stamps, cigarette cases, jeeps and much else besides and they consequently either elected to paint on a version of the logo to their helmets or, as seems more likely, painted this on after they left Africa to distinguish their helmets from those of German soldiers who had served on the Western or Eastern Front, or elsewhere in Europe. Essentially it was a symbol of being a veteran of the North Africa campaign in this respect, but this does not mean that these instances are authentic, official logos.

In conclusion then, the notion that German soldiers in the Afrika Korps were issued with helmets bearing the palm tree and swastika logo is something of a myth. This symbol or logo was certainly real and was widely used by the Afrika Korps and the German command in North Africa between 1941 and 1943. It appeared on everything from stamps, service rings and cigarette cases to the sides of jeeps and tanks. Indeed, perhaps the most curious thing about the supposition that this logo appeared on the helmets of German soldiers in North Africa, is that helmets were one of the few objects that this symbol was not emblazoned on by the Germans in North Africa!