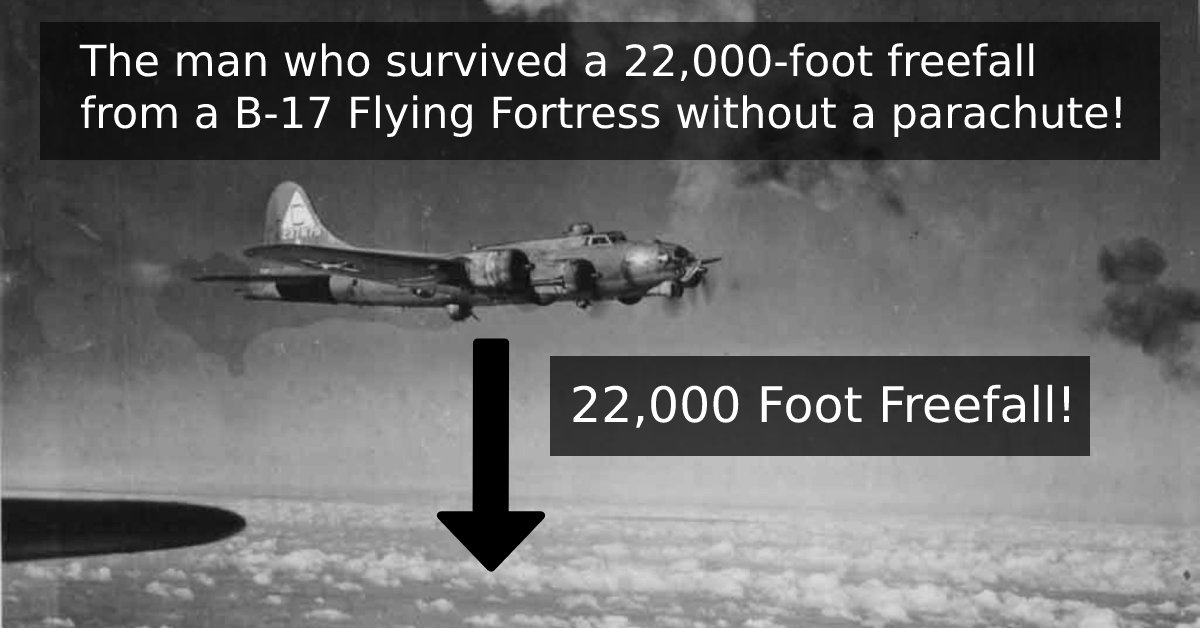 There are many amazing survival stories associated with the Second World War. For instance, in 1942 a Japanese fighter pilot called Saburo Sakai was shot through the head. He was blinded in his right eye and the damage of other bullet wounds which he sustained left him paralyzed in the entire left-hand side of his body while in his plane. But despite his inability to largely see or move Sakai managed to fly his plane for over four hours over a distance of 1,050 kilometers back to Japan where he landed safely. Bizarrely, though, Sakai’s story is not the greatest survival story of the war. That particular honor surely belongs to the American airman, Alan Magee.

Alan Magee was born in Plainfield in the state of New Jersey on the 13th of January 1919, the youngest of six children. He appears subsequently to have ended up working for the famous cereal-maker, the Kellogg Company, but his life took a major shift in December 1941 when Magee was twenty-two years of age. On the 7th of December 1941 the Empire of Japan attacked the United States’ Pacific Fleet at Pearl Harbor. As a consequence the United States entered the Second World War and Magee quickly enlisted in the United States Air Force. In June 1942 he was assigned as a Ball Turret Gunner with the 303BG/360BS at Almogordo Field in New Mexico. Thereafter he was sent to the United Kingdom to work as a gunner on a B-17 plane 41-24620. It would be a fateful appointment.

On the 3rd of January 1943 Magee’s plane, codenamed ‘Snap, Crackle, Pop’, it seems under the influence of Magee himself, given his former position as an employee of the Kellogg Company. It was Magee’s seventh mission and his last. Their goal on this occasion was to conduct a bombing mission over the town of St Nazaire in the River Loire estuary in western France. The B-17 Flying Fortress was a substantial plane. A heavy bomber, it had first entered service in 1936 and was manned by multiple crew members who operated variously as pilots, gunners and bombers.

The mission did not go as planned. In the course of it Magee and his crewmates came under heavy fire from German anti-aircraft fire. Magee’s ball turret on one side of the plane was rendered inactive in the course of this sustained fire and as a consequence he attempted to move to another part of the plane. During the course of this it became apparent that his parachute had been damaged, a worrying development as the plane continued to come under fire. Then, as he was attempting to move further up the plane, flak fire from the German anti-air guns below effectively ripped the entire right wing off of the plane. Robbed of its internal pressure, the plane entered a spin and became descending precipitously. The oxygen also started to evaporate from the plane.

It was this moment which produced one of the most spectacular survival stories ever seen. Faced with the total drop in oxygen from the plane Magee passed out. Unlike his fellow gunners and the pilots of the plane he was now thrown out of the plane through the exposed area. In the seconds that followed, the unconscious Magee began to fall from a height of some 22,000 feet over the River Loire region in western France. When he eventually reached the ground, a drop which it seems inconceivable that any individual could survive, he crashed through the glass ceiling of the railway station of St Nazaire. The glass shattered and this saved Magee’s life, as it slowed his fall and reduced the impact. Nevertheless, he was very badly injured. Magee had already been injured considerably in the B-17 before he was thrown out of it, with shrapnel embedded in his skin in several places. The fall itself, the impact and the damage sustained from the broken glass augmented all of this and by the time that Magee was found on the floor of the railway station he had broken several bones, had sustained severe facial injuries, including to his nose and eyes, had internal damage to his lungs and kidneys and most significantly one of his arms was very nearly severed entirely. While his injuries were brutal, it is miraculous that he was still alive.

However, Magee’s ordeal was not over yet. He was captured by the Germans on the ground and was now a prisoner of war. On questioning once he had recovered to some extent he is said to have reported that he had no memory of what had happened. He was detained for over two years as he gradually recovered from his substantial injuries and was only eventually released from a Nazi internment camp in May 1945 at the very end of the war in Europe. He was subsequently awarded an Air Medal, a US Armed Forces award for particular acts of bravery, and a Purple Heart, the award made to US servicemen who sustained injuries in the course of their service. Few individuals can have been more deserving of it, given the circumstances under which his injuries were acquired.

Strikingly, given what had happened to him during the war, Magee moved into the burgeoning commercial airline industry after the war. Having returned to the United States he obtained a pilot’s license and thereafter worked in the airline industry for three decades until he retired in 1979. He was honored on the fiftieth anniversary of his fall by the French government, over whose airspace Magee had fallen, in 1993 when a statue to he and his fellow crew members was erected in the town of St Nazaire. Two years later in 1995 Magee and his wife attended an unveiling ceremony to mark the event in France. The man who fell from 22,000 feet died sixty years after his fall from a combination of kidney issues and a stroke in San Angelo, Texas. He was 84 years of age at the time, a testament to exactly what the human body can actually sustain and live for many years after.