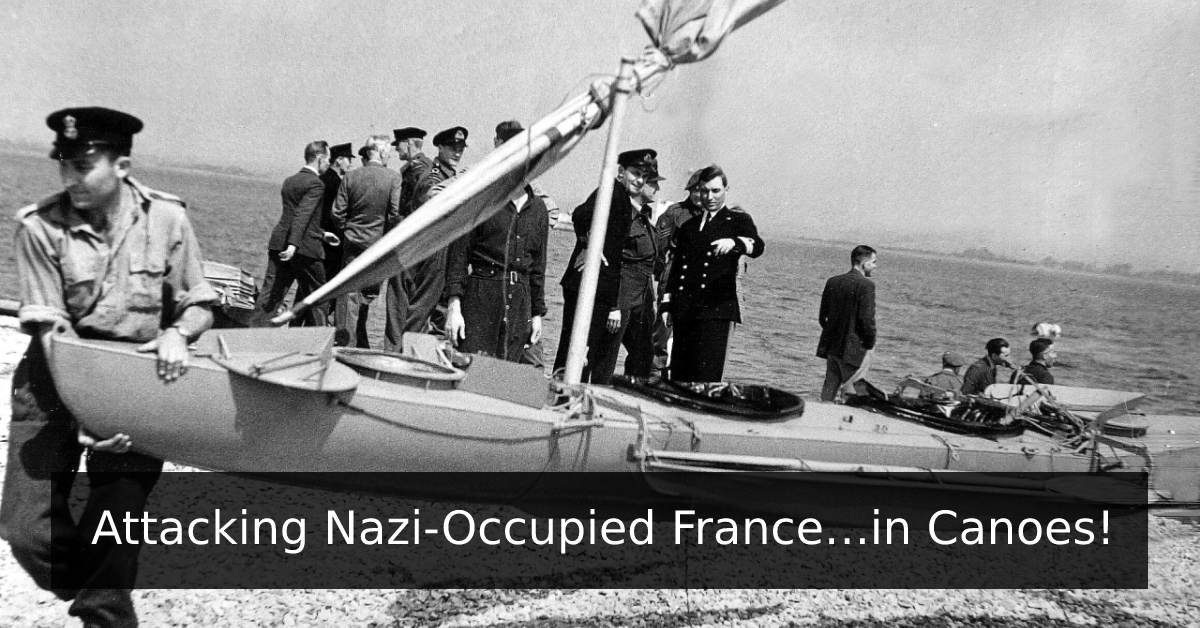 Many raids were carried out by British commandos against Nazi-occupied Europe during the course of the Second World War. From western France all the way north to the fjords of Norway these took in a vast swathe of territory and were carried out in many different ways. Some involved Royal Navy ships and hundreds of Allied troops making daring raids on coastal sites. Others saw units of paratroopers landing behind enemy lines in stealth operations. But surely the award for the most audacious raid against the Nazis during the war must go to Operation Frankton, when in the early winter of 1942 less than a dozen British soldiers attacked the Nazi-held port of Bordeaux in France…in canoes!

This daring operation was carried out by the Royal Marines Boom Patrol Detachment (RMBPD) which had been formed in July 1942 as a special operations division of the Royal Navy. It was under the command of Major Herbert ‘Blondie’ Hasler and his second in command, Captain J. D. Stewart. Hasler was looking from the summer of 1942 for a mission which could be undertaken to put the new unit he commanded to good use. By the late autumn he had found a suitable objective. Since the occupation of France in the summer of 1940 the city of Bordeaux on the River Garonne in the southwest of the country had been used as a major supply port for the Germans in western Europe. For instance, 25,000 tones of crude rubber were imported into the city in the twelve months between the summer of 1941 and the summer of 1942. Accordingly, Hasler believed that the RMBPD should attempt to strike at Bordeaux’s shipping in order to stem this flow of war materiel.

Attempts to interrupt German supply lines were not unusual amongst Allied war-plans in 1942. Yet what was truly unusual was Hasler’s plan for how to do it in this case. Under what was codenamed Operation Frankton it was intended that Hasler and a dozen of his fellow commandos would be transported to the outer estuary of the River Garonne in the Bay of Biscay called the Gironde Estuary on board a Royal Navy submarine. On board they would also be transporting six folding kayaks called the Cockle Mark II canoe. These large canoes could transport two individuals and a heavy amount of goods. Having reached the Gironde estuary, Hasler and his marines would kayak up the river to Bordeaux over a period of several days before entering the port. Once there they would stealthily place limpet mines, which had magnetic connectors, on a large number of ships in the port of Bordeaux before attempting to make their escape undetected south over the border to neutral Spain.

It was a highly daring plan and it partially succeeded, though at a great cost to almost all of those who took part in it. On the 30th of November 1942 thirteen commandos led by Hasler set off from Holy Loch in Scotland on board the HMS Tuna submarine. On board were six folding canoes or kayaks called the Catfish, Crayfish, Conger, Cuttlefish, Coalfish and Cachalot. Eight days later, on the 7th of November, the submarine arrived at the Gironde Estuary. At roughly 20.00 that evening the canoes were disembarked from the submarine into the water. One of the canoes, the Cachalot, was damaged in the process and so just ten of the commandos on board the remaining five kayaks began the long trip of nearly 100 kilometers through the estuary and upriver to Bordeaux.

The trip was arduous, with the crews paddling nearly constantly and only stopping for a few minutes every hour. On the first night the Conger was scuttled and its two crew members had to bail out into the surrounding countryside. They subsequently died of hypothermia in the cold December weather. Then when trying to pass by three German frigates in the river the two crew members of the Cuttlefish had to make landing and were separated from the others. They were captured on land several days later. As a result, just a day into the raid only the Catfish, Crayfish and Coalfish were still afloat. Twenty-four hours later the Coalfish and its two commandos were apprehended as well near the Pointe de Grave lighthouse. Thus, it was just the Catfish, piloted by Hasler and Bill Sparks, and the Crayfish, with Albert Laver and William Mills piloting it, which arrived at Bordeaux on the night of the 11th of December 1942.

The four commandos now split up and proceeded stealthily into the port of Bordeaux. They launched their attack at roughly 21.00 hours that night, placing their limpet mines on the sides of numerous ships and patrol boats before leaving the port shortly after midnight without having been detected. Eventually it would be learned that six ships were damaged when the mines exploded some time later, several of them badly so. But by then Hasler, Sparks, Laver and Mills were gone. By 6.00 on the morning of the 12th they had proceeded well down river and beached their canoes near St Genes de Blaye. They then set out on land in two separate groups to make for the Franco-Spanish border along the Pyrenees. Laver and Mills were apprehended at Montlieu-la-Garde not far from Bordeaux by the French gendarmerie and were subsequently handed over to the Germans. Hasler and Sparks were consequently the only two of the ten commandos who originally set off on the mission to escape to Spain. First they proceeded to the town of Ruffec, about 100 miles from Bordeaux, where some resistance fighters helped them get over the border to Spain. Once there they travelled to Gibraltar and Hasler eventually made his way to Britain in April 1943, with Sparks following some time later.

Consequently, Operation Frankton was a costly mission for those who participated in it. Six of the commandos were captured and executed in France, which in addition to the pair who died of hypothermia, meant that Hasler and Sparks were the only two who set out in their canoes on the 7th of December 1942 to survive the mission. But it was a considerable success, striking a blow against Nazi shipping in western France and demonstrating that the Germans could suffer attacks from even the most limited of Allied forces. As such, while Operation Frankton was not the most significant commando raid undertaken in Europe during the Second World War from a strategic standpoint, it surely was the most audacious raid of its time.