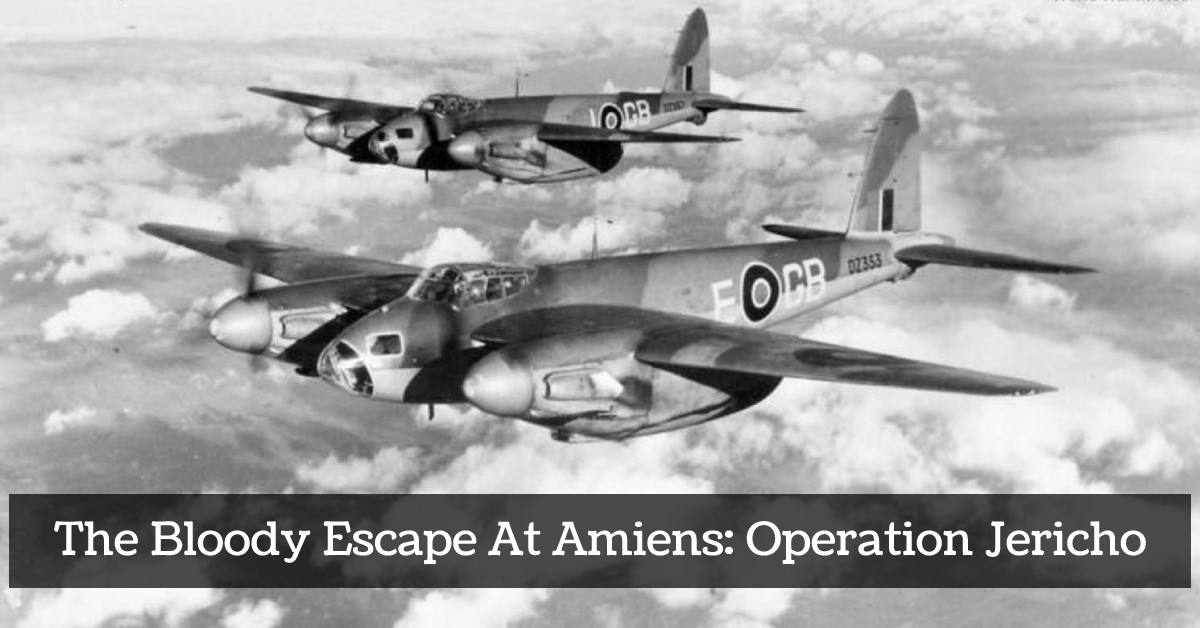 The Second World War witnessed many great escapes of resistance fighters from occupied countries and Allied prisoners of war from German controlled territory across Europe. The most famous was surely the ‘Great Escape’ from the Stalag Luft III POW camp. Others were carried out, attempted or just planned and there was an entire department in England which was dedicated to manufacturing watches with hidden compasses, silk maps that could be placed in domino pieces and weapons masquerading as pencils. These were smuggled into the POWs in care packages. All of it was in aid of carefully planned, clandestine escape attempts. But some escape attempts were less subtle and simply involved brute force. Surely the greatest of these particular ones was the Allied endeavor in February 1944 to get hundreds of French resistance fighters out of Amiens detention center by bombing one end of the prison. It was called Operation Jericho.

The context in which this occurred was the increased planning for the opening of an Allied Western Front in France. In the course of 1943 as Churchill, Roosevelt and Stalin deliberated on where this should be initiated, Allied reconnaissance of northern France increased and more and more French resistance fighters were being deployed in the area to try to get a good sense of where the Germans were strongest and where they were weakest. In particular the Allies needed detailed info on the Atlantic Wall of German defenses along the French coast. As French espionage efforts across German-occupied northern France increased so did the activities of the German secret police, the Gestapo, to try to locate French resistance fighters. Thousands of arrests were carried out in the autumn and into the winter of 1943. These included Roland Farjon and Raymond Vivant, two prominent figures in the Organisation Civile et Militaire, one of the foremost French resistance movements. Farjon and Vivant had been sending detailed info to London on German military installations, so when MI6 learned that these were being held at Amiens prison in northern France, and that many of the leading Resistance figures at Amiens would soon be executed by the Germans, they decided to act to get them and many others out.

Amiens prison was a large German-run detention center in the Picardy region. A machine gun turret adorned the yard of the prison which meant that a frontal assault by some infantry parachuted in to the region was suicide. Instead it was decided to launch an air assault using 19 of the fast Mosquito light fighter-bomber planes which had entered service in late 1941, accompanied by 14 Typhoon fighters as an escort. These would fly in at a very low altitude to bomb the guard stations and parts of the prison wall. Information on the layout of the jail had been obtained through the Resistance and there was an exact idea of where needed to be hit. If this was accomplished it was believed that a path out of the prison would be cleared and the reverberations from the bombing would trigger the cell doors within the prison to open. The Resistance network had ensured that many of the inmates were aware of the plan and waiting for the cue to move. Meanwhile, further Resistance fighters in the region had been supplied with extensive arms and ammunition and would be lying in wait very near the jail to arm those who were making their escape as soon as they got out. With all this in place Operation Jericho was scheduled for the 17th of February 1944.

When the 17th came the mission was delayed because of heavy snow and bad weather which would have made visibility very poor. This persisted into the following day, but it was determined at this point that the Resistance fighters in place around Amiens couldn’t wait any longer and the mission had to proceed. Thus, 19 Mosquito bombers were launched at about 11am, the plan being to hit Amiens at midday while the guards there were at lunch and congregated together in a specific place. They were soon joined in the sky by 11 Typhoons, but three others had been forced to abandon the mission as they lost the main formation owing to the bad weather. As they flew in over France they were reportedly flying at such a low altitude to escape radar detection that the planes were dangerously close to scraping the tops of the trees below.

They flew in over the prison at exactly one minute after 12. Over the next ten minutes the Mosquitos circled round several times, bombing the guardhouse and focusing their efforts on creating a breach in the eastern wall of the prison. Time was of the essence. Several Luftwaffe bases were in the near vicinity and their fighters were quickly scrambling to get into the air. By the time the wall was breached about 12.15 most of the Mosquitos were being closed in on by German Fw 190s. They made their escape as the Resistance fighters started to escape below, but two fighters and two bombers were lost.

Down on the ground the prisoners were making their way to the breach. Hundreds were attempting to get out, but the air raid could only be so successful. While several of the German guards had been killed in the bombed guardhouse, others were reacting and getting ready to shoot the inmates as they made their way across the courtyard. In the end, of the 832 prisoners who were being held at Amiens, 255 of them escaped in the hour following the opening of the breach in the wall. However, even of those who made it out, only 73 made it fully away. 182 were rounded up and re-imprisoned in the hours and days that followed. Yet, although less than 10% of the prisoners escaped fully, it was significant that they did. Based on the circumstances under which they had first been apprehended, these men were able to reveal details of who the Gestapo was using as informers throughout northern France.

Overall Operation Jericho was a success. It resulted in 73 Resistance fighters escaping from Amiens and the information they provided damaged the German intelligence gathering network in northern France in the weeks ahead during a critical phase in the planning of the D-Day invasion. Some debate later emerged as to who had actually ordered the mission and what the exact purpose of it was. It might well have been the case that in undertaking the mission the British had hoped to further suggest to the Germans that the coming invasion would take place close to Calais and the Picardy region in which Amiens was located. If so, the ploy worked. When the D-Day landings started just over three months later on the 6th of June the Germans had concentrated their defensive build-up around Calais, rather than at Normandy where Operation Overlord was eventually implemented.