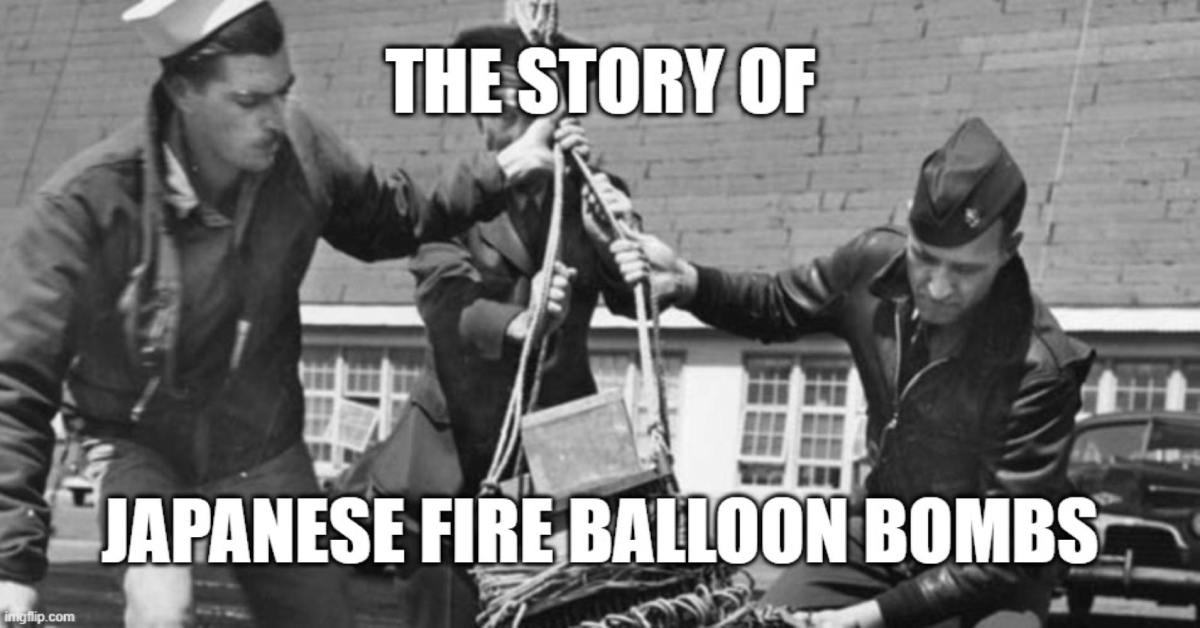 It is often assumed that the world’s first inter-continental weapon system was the Convair B-36 Peacemaker, a US strategic bomber which was the first plane of its kind capable of flying between continents without refueling. Designed to hold a nuclear bomb it gave the United States the ability to launch nuclear strikes against Russia or any other foe when it entered service in 1948. However, the Peacemaker was actually not the first military hardware devised to allow inter-continental strikes. That distinction goes to the humble Japanese Fu-Go Balloon Bomb, which was developed and utilized in the final year of the Second World War. Though admittedly less destructive than the Peacemaker, the Balloon Bomb allowed the Japanese High Command to strike at the continental United States all the way across the Pacific Ocean.

The concept of using balloons to drop incendiary devices on an enemy had a long history by the time of the Second World War. As early as 1792 Joseph-Michel Montgolfier, a French aviation pioneer, had suggested using balloons to drop explosives on British ships which were blockading the French port of Toulon during the French Revolutionary Wars. Then in 1849 Austrian troops who were besieging the city of Venice during the First Italian War of Independence attempted to drop 24 to 30 pound bombs on the city using hot air balloons. It was hardly a success and some of the balloons actually blew backwards in the wind and landed in the Austrians own lines. More recently the British had been launching tens of thousands of balloons at Germany during the Second World War. Operation Outward was designed to attack German infrastructure by either cutting communication and supply lines or setting fields and buildings on fire.

Thus, there were precedents for using balloon bombs when the Japanese set about doing this towards the latter end of the war. The plan was to manufacture large balloons made out of rubberized silk, though the material was later changed to ‘washi’, a highly durable kind of paper made out of mulberry bushes. These were large balloons which measured about ten meters in diameter when fully inflated. Consequently they were capable of carrying up to 450 kgs of gear, much of which was made up of several 33 pound or 26 pound bombs. The balloons would be launched from the western parts of Honshu, Japan’s largest island. The Japanese had discovered by 1944 that a strong winter current of air flowed at a high altitude across the Pacific Ocean, roughly between 30,000 and 35,000 feet. This was a jet stream and the Japanese were confident that if the Balloon Bombs were jettisoned into this then it would do much of the work to carry the bombs across the Pacific towards North America. Such was the strength of the jet stream that it would be capable of carrying the balloons across the ocean in less than three days, where they could then descend into the United States or Canada.

A number of clever innovations were introduced into the bombs, which by now had acquired the name Fu-Go, roughly meaning ‘Fire Balloon’, to insure that they were carried along in the jet stream. This meant the balloons had to be kept at the right altitude. Altimeters which measured the height of the balloon were accordingly installed and this could be used to trigger reactions in the balloon which would keep them somewhere between 30,000 and 35,000 feet off the ground. If the balloons tried to descend below this it triggered an action whereby the balloon released sandbags which were attached to it until such time as the reduction in weight brought the balloon back up above 30,000 feet. Similarly, if the balloons went too high the altimeter would trigger a response to vent hydrogen out of the balloon, thus causing the balloon to begin descending. As a consequence the balloons were constantly kept at a height in which they were being swept along by the jet stream. Finally, after 72 hours, by which time it was assumed the balloons would be over North America, a mechanism kicked in which lit a 20 meter long fuse tied to a small flash bomb. When this small incendiary went off it was designed to destroy the balloon itself and send the heavier bombs downwards towards the United States.

With this fairly ingenious balloon bomb developed, the Japanese began mass manufacturing them in the second half of 1944. Initial tests were carried out in September and the first Fu-Go Balloon Bomb was launched at the United States on the 3rd of November 1944. Some of the initial balloons were used for meteorological and reconnaissance purposes, but as the weeks passed they were soon being used almost exclusively as balloon bombs. Somewhat worryingly there was a suggestion at one time to use them as biological weapons. The 9th Army Technical Research Laboratory in Noborito had developed several weaponized viruses by 1944 which it was now proposed could be launched at America using the balloons. These included enough cowpox-virus to infect every single American and also anthrax. Fortunately when it was proposed to use deploy these using the balloon bombs this proved a step too far for the Japanese Emperor Hirohito who did not sanction the same.

The launch of the first balloon bombs had been undertaken in early November as the jet stream which was effectively being used to carry the balloons swiftly across the Pacific Ocean was at its strongest between November and March. Thus, in the five months between November 1944 and April 1945 9,300 Fu-Go Balloon Bombs were launched from Japan across the Pacific at the United States. Yet the Japanese had also made a major error in their calculations. This was also the wettest part of the year in North America and it is generally believed that many of the balloon bombs which eventually made it to North America failed to cause any damage because the fires created by explosions were quickly put out by wet surroundings and rain, whereas had they landed in the late summer or early autumn of the year they could have started major forest fires across the West Coast of America.

The Japanese had expected that only about 10% of the balloon bombs would ever make it to the North American continent, where they would most likely land in Canada or the United States, two nations with which the Empire of Japan was at war, although some did land in Mexico. Their estimate is generally deemed to have been accurate. Some 300 of the balloon bombs are recorded as being identified in North America and several hundred others probably landed in unpopulated areas where they went undiscovered. The remaining 8,000 or so were lost in the Pacific Ocean.

Despite there being hundreds of Balloon Bombs which actually made landfall in America, they were a strikingly unsuccessful weapon of war. By April 1945 the Japanese high command ordered the cessation of the production and launch of the bombs, having determined that they were either not reaching America or were not working in some other fashion. Accordingly the project to develop, produce and launch thousands of these was a costly failure in the eyes of the Japanese military.

Yet the bombs had caused something of a hindrance. By the first weeks of 1945 the US government had sufficient information about mysterious explosions and strange flying objects being sighted between California and Alaska to know that something peculiar was occurring. Several balloons had been directly identified in western states such as Wyoming, Washington, Montana and Oregon, but the US government had ordered a press blackout on reporting on these after a number of stories appeared in Newsweek and other outlets in January 1945. Roosevelt’s administration feared, quite rightly as it transpired, that if the Japanese believed that the bombs were either making it to America or were having an impact they would continue the campaign to produce and launch them, whereas if they heard nothing about American fatalities they would discontinue the program. In the end there would be little actual damage inflicted on any infrastructure in the United States, though there was a worrying close call in early March 1945 when one of the balloons descended near the Hanford Site in Washington State where some of the research into the Manhattan Project was being undertaken. This briefly caused a short circuit in the power supply to the cooling rods used on the nuclear reactor at the site, though the emergency power supply kicked in immediately and prevented a meltdown. Had it not, the Fu-Go Balloon Bombs would probably be much more widely known about today.

There were, however, six deaths associated with one of the bombs, the only known fatalities of the entire Balloon Bomb campaign. On the 5th of May 1945, several weeks after the Japanese had stopped launching the incendiaries across the Pacific Ocean, Archie Mitchell, a pastor with the Bly Christian and Missionary Alliance Church, in southern Oregon, and his wife Elsie were driving through a forest on Gearheart Mountain in the state looking for a place to have a picnic. They were accompanied by five Sunday School children aged between eleven and fourteen years of age. Owing to some roadworks, Archie let his wife and the five children out of the car while he went to find a parking spot. As Archie searched he heard two explosions. Elsie and the children had stumbled across one of the Japanese Balloon Bombs lying on the ground in the forest. It is generally believed that one of the children kicked the balloon, obviously not realizing what it was, and that this set off two bombs attached to it. By the time that Archie made it to the site four of the children were dead, killed almost instantly in the explosion. Elsie was still barely alive, but she too died as Archie was attempting to put out some flames which were on her clothes. Only one of the children, Joan Patzke, survived the initial blast, but she too died of her wounds several hours later in hospital. Elsie Mitchell, it later transpired, had been pregnant. Subsequent investigations determined that the Balloon Bomb had probably been lying at the spot for weeks or even months. Today a marker, known as the Mitchell Monument, stands at the site of the bombing, the scene of the only war fatalities to have occurred in the continental United States during the course of the Second World War.

For many years thereafter the Fu-Go Balloon Bombs were the longest ranged attack device in military history, a record which was not eclipsed for nearly four decades. They were only eventually surpassed when the Operation Black Buck raids were carried out in 1982 during the Falklands War. These saw bombing raids being carried out over a 6,600 kilometer distance between Ascension Island in the mid-Atlantic and the Falklands way down at the bottom end of the Americas.

A special thanks to National Museum of the Pacific War in Fredericksburg, Texas for letting us use your photos in this article 🙂