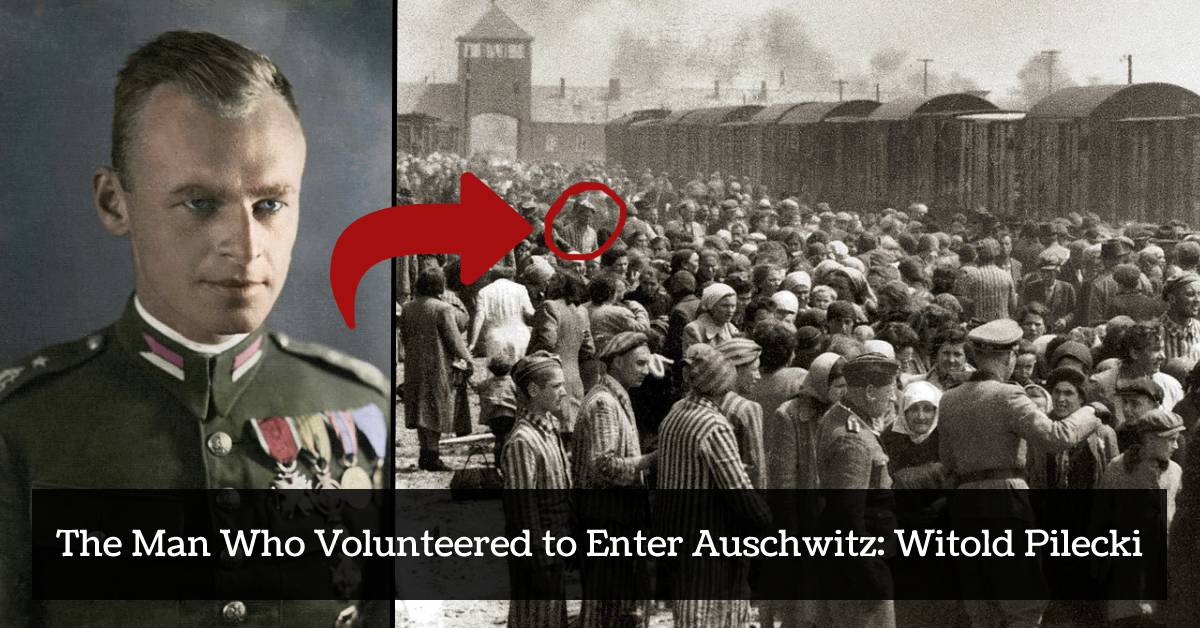 No other place has entered into the collective consciousness of humanity as being a symbol of the crimes of Nazi Germany and the Holocaust of the Jewish people which it perpetrated as has Auschwitz, the enormous concentration camp in western Poland where approximately 1.3 million people were killed between 1940 and early 1945. Most were Polish and Hungarian Jews who were intentionally murdered shortly after their arrival there, while hundreds of thousands were worked to death as slave labor. Auschwitz was clearly a place one avoided being sent to as a detainee at all costs. It is then remarkable to find that one individual, a Polish resistance leader, actually volunteered to be captured and sent here in 1940. He subsequently spent three years as an inmate at Auschwitz, during which time he organized an internal resistance movement and sent the Allies reports on conditions in the dreadful setup found there. This is the story of Witold Pilecki.

Witold Pilecki was born in the town of Orelia in Karelia in Russia in May 1901. His family hailed from a Polish noble family which had consistently resisted Russian rule in the part of Poland which had been swallowed up by Tsarist Russia during the partitions of Poland in the late eighteenth century. As a consequence Pilecki’s family had been deported to Russia proper in the nineteenth century, but they never lost their strong sense of Polish nationalism. As a result Pilecki fought for the Polish Second Republic following its formation in 1918 as part of its involvement in the wider Russian Civil War. He subsequently rose within the Polish military and continued in that role during the interwar years of the 1920s and 1930s. Thus, when Nazi Germany invaded Poland in September 1939 Wilecki fought in the brief war of occupation and quickly joined the Polish Resistance movement in its aftermath. It was in this capacity that he would volunteer to enter Auschwitz the following year.

Originally Auschwitz concentration camp was established as small labor camp on the site of a former Polish army barracks in Silesia in western Poland early in 1940. The first loads of prisoners began arriving in the early summer. However, what started as a small labor camp quickly expanded in the course of late 1940 and early 1941 into a vast complex consisting of three camps. Auschwitz Camp 1 was the main administrative and labor camp, where the German officers and staff also lived. Camp 3, known as Auschwitz-Monowitz, was eventually set up as a slave labor camp, primarily to produce synthetic rubber through the IG Farben chemical company. But the camp is most infamous for Camp 2, Auschwitz-Birkenau, which was effectively a death camp where, beginning in the autumn of 1941, hundreds of thousands of individuals were gassed to death using prussic gas or Zyklon-B and then had their bodies cremated on site. At its peak in the summer of 1944 when half of Hungary’s Jewish population of 750,000 people were killed at Auschwitz in the space of just five months, upwards of 5,000 people were being killed and cremated at Auschwitz-Birkenau every day.

This was the place Pilecki volunteered to enter in August 1940, the Resistance movement in Poland needing details on the new camp and what it would be used for. It was arranged for him to be arrested by the Germans on the 19th of September 1940 as part of a wider group of some 2,000 Polish political prisoners. He carried papers at this time which identified him as a Tomasz Serafinski. Within days he had been sent to Auschwitz where he was admitted as prisoner number 4,859, an indication of exactly how small the camp was at this early stage.

Pilecki would spent three years at Auschwitz, during which time it expanded from a small labor camp and detention center of Polish political prisoners, to one of the most horrendous death camps run by the German SS across Europe. Throughout these years he drew up numerous reports on the conditions within the camp and the increasing level of mass murder being orchestrated by the Nazis there. These were smuggled out to the Polish resistance movement. By 1942 Pilecki was able to provide approximate details of the numbers of people being killed there. Additionally he was involved in efforts to expand the resistance movement amongst Auschwitz’s many tens of thousands of inmates. Plans were once even being considered to lead an internal rebellion aided by external support from the Polish Resistance and in 1942 Pilecki and his network of allies within the camps even succeeded in setting up a radio station inside Auschwitz which for a period even managed to broadcast reports to the Polish Resistance movement throughout the wider country.

Pilecki did all of this at considerable risk to his own personal well-being. Because of the appalling conditions in the camps disease and malnutrition were rampant there and he once survived a bout of severe pneumonia while at Auschwitz. However, as time went by the greater threat came from the SS and the Gestapo, which were aware that there was an internal resistance movement of some kind operating within the camp. As these sought to uncover the ring-leaders Pilecki eventually decided to escape in the spring of 1943 before he was identified and executed as being a major orchestrator of the unrest. Thus, after being assigned to a night shift at the camp bakery on the night of the 26th of April 1943 he and two others managed to escape by overpowering a guard and escaping beyond the perimeter of the camp. Having finally escaped he reconnected with the Resistance movement and produced a comprehensive account about Auschwitz called Witold’s Report which provided further intelligence to the Allies about what was occurring in the metropolis of death which Auschwitz had become.

There is no doubt that Witold Pilecki was a war hero. And yet he would not be commensurately honored in the aftermath of the Second World War. As the conflict with Germany drew to a close Poland was yet again subsumed by Russia. In the years that followed a Polish communist state, which was effectively a puppet of Moscow, was established. Pilecki was soon a part of a new Polish resistance movement to oust the Russians from his country. By 1946 he had been ordered to leave Poland or face prosecution. He refused and in May 1947 he was arrested by the communist authorities. A show trial followed a year later, by which time Pilecki had been tortured on several occasions, but he had steadfastly refused to provide information about others in the new resistance movement. He was quickly found guilty and executed in Warsaw later that month, despite the attempts of many former inmates of Auschwitz to plead for clemency on his behalf. Thus died the man who volunteered to enter Europe’s most brutal concentration camp under Nazi occupation, but several books and accounts of his career in the years since have ensured that Witold Pilecki’s story is not forgotten.