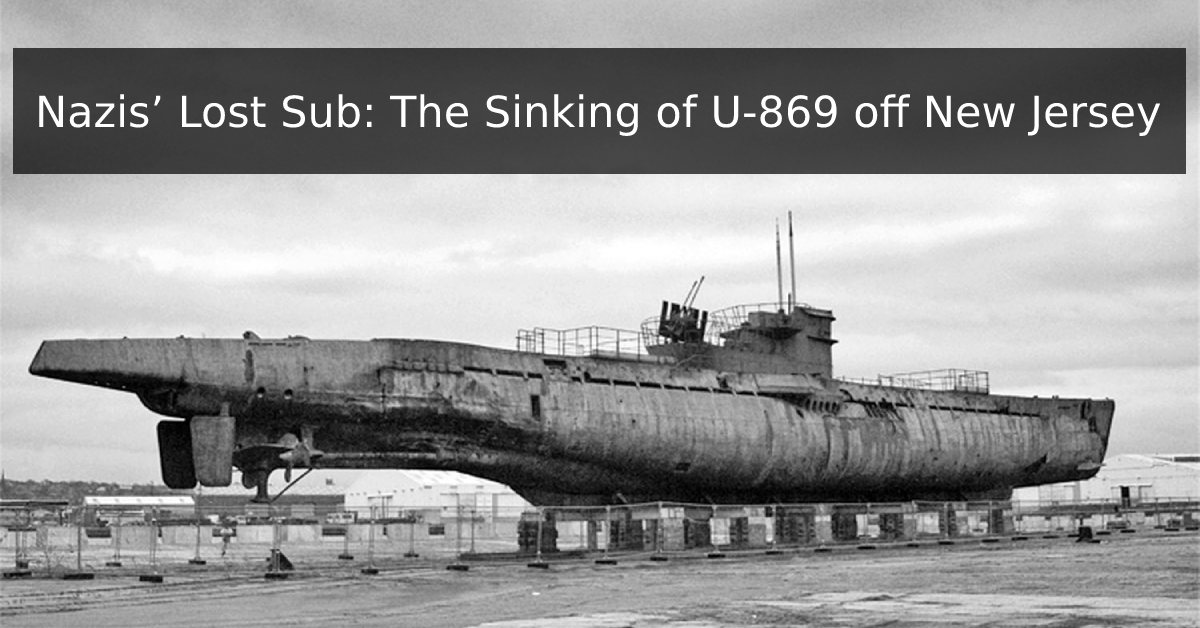 We are all familiar with the Battle of the North Atlantic and the ubiquity of the German submarines, the U-boats to the same. From 1939 all the way through to 1945 hundreds of German U-boats patrolled the waters of the North Atlantic and the Western Atlantic as far south as the Mediterranean Sea. However, the operational area of the U-boats was generally restricted to this part of the world during the Second World War, and the scope of their activities is typically understood to have drastically declined from 1943 onwards as the Nazis focused their resources on the land war in Europe. Given all this, how do we explain the sinking of U-869 off the coast of New Jersey in North America in the closing months of the war and what does its presence there tell us about the U-boat activity in the West Atlantic? This is the story of the Nazis’ Lost Sub.

U-869 was a German Type IXC/40 submarine, a slightly larger late version of the German U-boats. It was over 76 metres in length and when powered by two super-charged four stroke, nine cylinder diesel engines could produce 4,400 metric horsepower. Perhaps most significantly it could dive to a depth of 230 metres, making it possible for it to descend roughly ten to twenty metres lower than the U-boats produced earlier in the war. The boat had a crew of 48 men, four officers and 44 crewmen, and was heavily armed with six torpedo tubes and 22 torpedoes, while deck guns and an anti-aircraft gun offered it some protection when on the surface. The keel of the boat was laid on the 5th of April 1943 in the northern German port of Bremen and it was only fully commissioned in January 1944, meaning that it was entering service at a time when the Battle of the North Atlantic had been comprehensively won by the Allies.

U-869 was not involved in any major engagements during the war. Despite having lost the Battle of the North Atlantic the Germans were still sending out U-boats in 1944 in order to try to sink Allied shipping in the run up to and aftermath of the D-day landings in northern France in the summer of 1944. As part of this, U-869 did complete a patrol of the Atlantic that year, but without engaging any enemy shipping. Then in early 1945 it was ordered south towards the Straits of Gibraltar between Spain and Morocco and was long-believed to have sunk there near Rabat in Morocco. But a discovery in 1991 was to prove otherwise.

In 1991 a diver by the name of Bill Nagle discovered the wreck of a submarine off the coast of the state of New Jersey in the north-eastern United States. This was a source of some mystery for several months as the team could not identify precisely what U-boat it might have been. First investigations suggested that this might be the wreckage of either U-550, which was known to have sank somewhere off New York on the 16th of April 1944, or U-521 which had been sunk earlier on the 2nd of June 1943 somewhere off Cape Hatteras in North Carolina. Neither seemed wholly likely though, as they were geographically a bit too far away from the site location off New Jersey. Years of further dives and investigations continued, but still without resolving the mystery of the sub.

Then in 1997 there was a breakthrough. There had already been a knife discovered in the wreckage in the mid-1990s which was engraved with the name ‘Horenburg’, the surname of one of the crew members of U-869, but the divers and investigators had ruled out the possibility that this was their mystery ship having consulted records which indicated that the U-boat in question had sank off Morocco. But now in the early autumn of 1997 a box of spare parts was found in the motor room of the ship during a dive. This bore serial numbers on the inside which indicated that it was clearly U-869. This theory was corroborated two years later when one Herbert Guschewski, a crew member who had been on shore leave owing to sickness in 1945, heard of the investigation and contacted those involved to alert them to the fact that the submarine had indeed actually been on patrol off North America in the spring of 1945, rather than near the Straits of Gibraltar as had been recorded at the time. The mystery of the lost sub had been solved.

So how did U-869 go down? There is no consensus. One theory suggests that it fell victim to a ‘circle-runner’, a technical issue where a U-boat torpedo would malfunction after being fired and circle round to attack its own ship. However, others have used attack logs for the US Navy to indicate that two American ships, the Howard D. Crow and the Koiner were on patrol off New Jersey in February 1945 and appear to have fired off some depth charges and that these might have been fired at U-869. Damage, though, to the hull of the submarine suggests both theories are possible and that during an engagement with the Howard D. Crow and the Koiner, during which it was hit by some depth charges, U-869 was also struck by its own torpedo. Thus, U-869 has the curious distinction of having been sunk by blows both from its own torpedoes and those of two US Navy ships.

But what does the presence of U-869 off the coast of New Jersey tell us about the wider war in its last year or so? The reality is that the movements of U-869 were less uncommon than one would think. Research in recent years has highlighted how wide-ranging attacks by German U-boats on American shipping were and how they had increased from the US’s entry into the war in December 1941. From this date U-boats had started to range wide and far along the East Coast of America, so much so that the shipping lanes next to states like North Carolina actually became known as Torpedo Alley. In total it is estimated that nearly 400 ships were sank in this one area alone by German U-boats between 1942 and 1945. U-869 was a very late example of one of these missions to attack at American shipping and to interrupt the passage of war materiel to Britain and America’s other allies across the Atlantic. Thus, the story of the Nazis’ Lost Sub is not as unusual as it perhaps first appears.