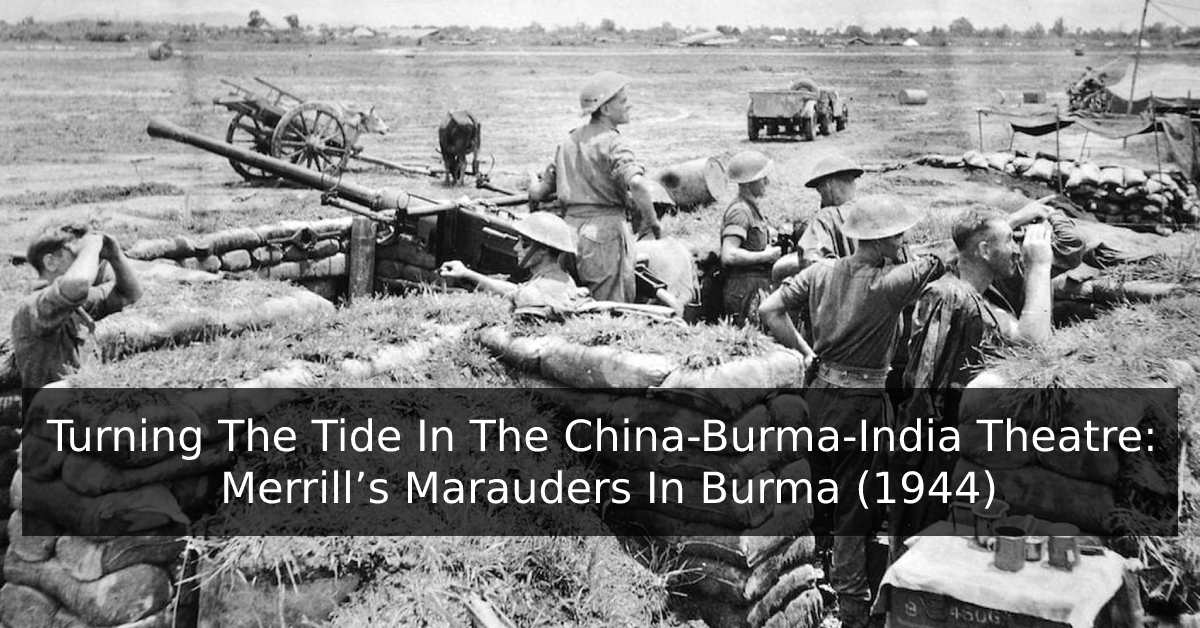 There are many theatres of the Second World War which remain comparatively obscure by comparison with the main fronts in Europe. Everyone knows about D-Day and the Battle of Stalingrad, but there is understandably less public awareness of, for instance, the Japanese bombing of northern Australia in 1942. Similarly, the course of events in the China-Burma-India theatre seldom holds pride of place in textbooks on the war. But this latter region was a wholly significant front, one which had major implications for the wider Pacific War. And it brought with it its own heroics, none more so than the actions of the US 5307th Composite Unit, better known as Merrill’s Marauders.

The Marauders were formed after a decision was made at the Allied Quebec Conference in August 1943 that a unit of deep penetration American troops that could operate in the jungle and behind enemy lines was needed in Burma. The campaign here on the China-Burma-India front in 1943 was not progressing well. The Japanese had invaded Burma in 1942 and even pressed into northeast India as a means of severing Allied supply lines from the Raj to the Chinese Nationalists led by Chiang Kai Shek in Central China. Efforts to roll back this advance had failed in 1943 and by the time the Allied leaders met in Quebec it was agreed that a fresh injection of troops was needed. One of the outcomes was the formation of the 5307th Composite Unit.

The unit was composed of approximately 3,000 men. Nearly a third of these came from the Caribbean Defense Command which consisted of officers and soldiers who were trained to deal with jungle-like conditions. A similar number, some 970 men, came from the Army Ground Forces in the US, while the final 900+ men were US veterans from the campaigns on Guadalcanal, the Solomon Islands and New Guinea where the environment mirrored that which would be experienced in Burma. Overall command of the new unit fell under the remit of General Joseph Stilwell, the head of the Northern Combat Area Command, the US’s operational division in the China-Burma-India theatre, but the actual day to day management of the 5307th Composite Unit was given to Brigadier General Frank Merrill. As a result, sometime after its formation, a Time correspondent, James Shepley, began referring to the unit as ‘Merrill’s Marauders’. The name stuck and has been used to refer to the unit ever since.

The Marauders had gathered at Bombay in British India by the end of October 1943 and spent much of the winter that followed training at various bases in the Raj. By January they were ready to contribute to a major push into Burma by the Allies in 1944 after the limited progress that had been made here the previous year. Thus, in February 1944 the Marauders were sent into Burma divided into three battalions. As a mobile unit they were well armed with rifles, machine guns, bazookas and mortars, but heavy artillery was limited and supplies had to be borne on pack mules and horses. This ensured that the Marauders were restricted to the ‘K Ration’, a daily food ration issued to US troops which consisted of three meals amounting to 2,800 calories per day, a low calorie intake given the ground they were covering on foot in an average day and the weight of the weapons and supplies each soldier bore.

In the three months that followed the Marauders trekked deep behind Japanese lines in Burma, scoring success after success. Victories were won over hundreds of Japanese troops at Maingkwan and Walawbum in the first weeks of their campaign and then in March they severed the Japanese supply lines in the enormous Hukawng Valley in what is now Myanmar. In April a further striking victory was won at Nhpum Ga, where a force of 400 Japanese were entirely wiped out, while just 57 fatalities were suffered by the Marauders. This was part of the wider pattern of the Marauders overcoming superior or equal forces throughout the spring of 1944 in Burma, with much fewer casualties being suffered themselves. Despite these successes the unit was much reduced by the end of the spring when just under half of the Marauders were still operational.

This was the context in which Stilwell and Merrill elected to send the unit to the town of Myitkyina where the Japanese had established a major airbase. If the airfield and town could be captured it would greatly facilitate the establishment of Allied air superiority over Burma. But the decision would prove fatal for the Marauders. The remaining 1,300 men in the unit arrived here in May 1944 after a grueling march through the jungle. Along the way they had been joined by men from the 42nd and 150th Chinese Infantry Regiments. With their combined strength the American and Chinese troops quickly overran and captured the airfield at Myitkyina on the 17th of May. Nevertheless, they now ran into a problem. The town nearby was defended by a garrison of nearly 5,000 Japanese troops who now settled in for a protracted siege. It would be the undoing of the remaining Marauders.

The siege of Myitkyina lasted two and a half months. In the summer heat conditions amongst the Allied troops around the town quickly deteriorated, owing to an outbreak of typhus. The troops were also poorly supplied and increasingly short of food. Most worryingly, severe dysentery began to occur amongst the Americans, in large part owing to the local water supply being unclean. Several weeks into the siege incidences of disease were so severe amongst the Marauders that men were passing blood in their urine and suffering through severe fevers as they tried to sleep. These conditions were punctuated by the monsoon rains. As a consequence of all of this by the time that the town of Myitkyina was captured on the 3rd of August after a major reinforcement by the Chinese Nationalists, only about 200 of the Marauders were left at Myitkyina, hundreds of men having either died from the conditions or being extracted to hospitals back from the lines. Given this level of attrition, the decision was taken on the 10th of August, one week after the fall of Myitkyina to disband the 5307th. By that time, only two of the nearly 3,000 original Marauders had not been either killed or spent time in hospital.

The Marauders were soon recognized for their bravery in the Burma campaign between February and August 1944, not least because the capture of Myitkyina gave the Allies command of a significant span of territory in Burma and also opened up additional supply lines from India to the Chinese Nationalists in China itself. In the course of reaching Myitkyina the Marauders had covered more jungle terrain than any other unit would in the course of the entire Second World War. Every man in the 5307th was accordingly awarded with the Bronze Star. More recently the Marauders were awarded the Congressional Gold Medal by the US Congress in 2020. Thus, 76 years after their heroics in Burma Merrill’s Marauders were awarded the highest expression in the US of national appreciation for military service.